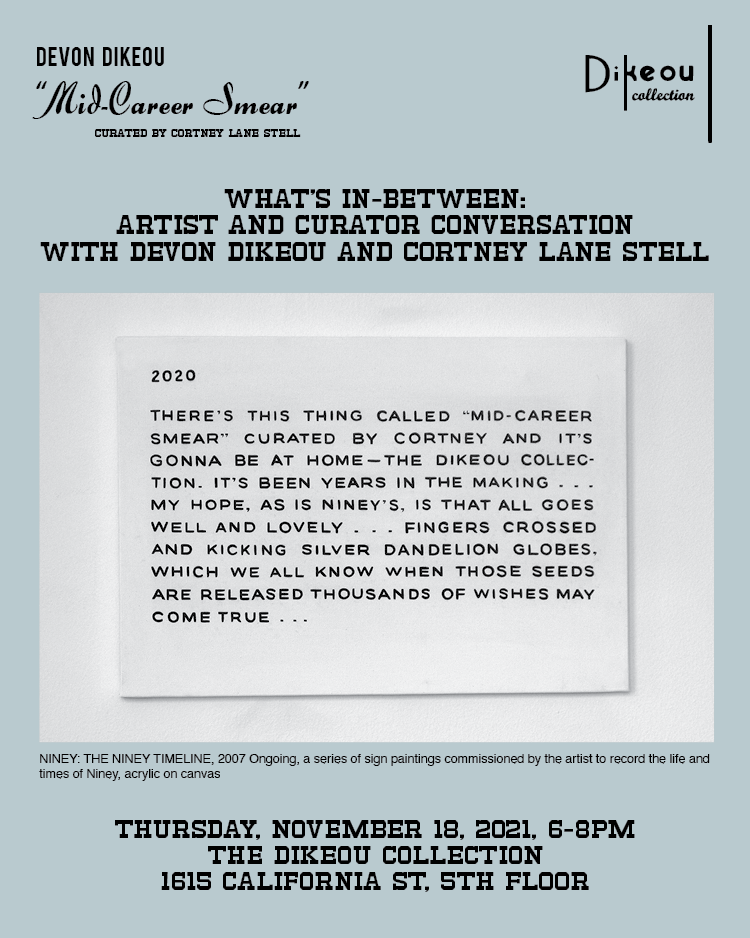 The Dikeou Collection presents What’s In-Between: Artist and Curator Conversation with Devon Dikeou and Cortney Lane Stell, where they will discuss Dikeou’s extensive art practice through the lens of her mid-career retrospective, which is currently on view. The Conversation will take place at The Dikeou Collection (1615 California St, 5th floor) on Thursday, November 18 from 6-8pm and is free and open to the public.

While “Mid-Career Smear” opened in February 2020, and reopened in March 2021 after a Covid-hiatus, Stell began to curate the exhibition in 2014, and built a history not only for the exhibition but within Dikeou’s art practice at large. Exhibited at The Dikeou Collection and Dikeou Pop-Up: Colfax (312 E Colfax Ave), “Mid-Career Smear” encompasses Dikeou’s work as an artist for the last 30 years in New York City, Denver, and Austin. Her work has centered on the relationship of the “in-betweenness” of the various points of the artistic process – from the making and viewing of art, to the realms of collecting, dealing, and critiquing – and the varied contexts where these activities take place be it on the street, gallery, museum, or in the pages of magazine.

Cortney Lane Stell is the Executive Director + Chief Curator of Black Cube, a nomadic art museum based in Denver, Colorado. She has held independent curatorial practice since 2006, which has included curating numerous exhibitions nationally and internationally for museums, university galleries, biennials, and art events.